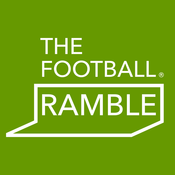 One of the most influential and entertaining shows about the world's most popular sport.

of
Jules & Andy: A mid-season break, West Ham's struggles and can Liverpool go unbeaten?
It’s Tuesday, and you know what that means: it’s time for another episode of Jules & Andy on Football Ramble Daily! We begin today’s show with a chat about the upcoming ‘mid-season break' that the Premier League is trialling, where it will split one round of matches over two weekends to give players a rest. Will this help reduce player fatigue as we head towards the Euros? Or will it simply result in a piling up of fixtures elsewhere? We try to answer those questions, and discuss Jürgen Klopp’s comments on the matter. Elsewhere, we look ahead to an intriguing midweek clash between West Ham and Liverpool. We discuss whether the Reds can go a season unbeaten and work out how West Ham might escape their current troubles.&nbsp; Get in touch via twitter: @julesbreach @andybrassell @footballramble or via email:
The Ramble: Shrewsbury rock Liverpool, Man United are BACK again, and it’s time for Newcastle’s annual takeover talk
Y’all ready for this? On today’s Milk Football Ramble we say the word “Cumdog” a frankly uncomfortable amount, but Shrewsbury’s Jason Cummings has given himself the nickname, scored twice to bring his team back from 2-0 down against Liverpool and so has given us no other choice.&nbsp; Elsewhere in the cup, the Bilić is back as Slaven’s West Brom knocked out his former club West Ham, Newcastle put on a show for their potential new owners and Man United turned on the style.&nbsp; As well as all that there are Evil Fulham fans, Sir Alex Ferguson’s legacy and that word “Cumdog” again. Urgh.&nbsp; Search ‘Football Ramble Da’ on social media to find us, and email us here:&nbsp;
The Blizzard: Liverpool 2-1 Blackburn, 1995
On today’s episode of Greatest Games, in association with The Blizzard we head back to another epic Premiership finale. The Irish Times' and Second Captains’ Ken Early joins us to remember Blackburn’s title win on the final day of the 1994/95 season, despite a 2-1 defeat at Anfield.&nbsp; Blackburn needed to win or hope title rivals Manchester United didn’t beat West Ham, to clinch their first title in more than 80 years. Many Liverpool fans at Anfield found themselves in the curious position of wanting their team to lose to Blackburn and thus denying their bitter rivals the title, as their treasured son Kenny Dalglish sat in the Blackburn dugout. Ken, Marcus and Jonathan remember the buildup to this pivotal final day that was the culmination of this season-long battle between the definitive Premier League juggernaut and their new challengers looking to halt a third successive title triumph. Fancy getting in touch? Email us at blizzard@footballrambledaily.com or find us social media— just search 'Football Ramble Daily'. For more stories from the annals of football history, visit www.theblizzard.co.uk to explore their archives that contain over 700 articles of stories just like this one! ***Please take the time to rate and review us on Apple Podcasts or wherever you get your pods. It means a great deal to the show and will make it easier for other potential listeners to find&nbsp;us. Thanks!*** For information regarding your data privacy, visit
The Preview Show: Man United are bad, but then so is most of the Premier League, so they probably fit in quite well
It's FA Cup time again! Let's all take a weekend off from how astonishingly bad the Premier League is and enjoy some red hot knockout action. Newcastle face Oxford, Chelsea and Arsenal lock horns, and Norwich try and spoil Burnley's post-Man United win party. We've covered it all in the way you'd expect, by talking about wagyu beef, Hollywood stars and moped thieves. Elsewhere, Marcus wants to praise Southampton, Pete doesn't know how to feel after Newcastle scored twice in injury time to get a draw against Everton, and there's another instalment of The Masked Winger. Who's under there, under the mask? Let's see if we can figure it out... This episode is sponsored by Betway. We're&nbsp;@footballramble on Twitter, and&nbsp;@footballrambledaily on Insta, so head over there to catch up on lots more Ramble stuff, including behind the scenes footage and lots more! You can also email us here:&nbsp;
On The Continent: Lyon's amazing academy, Jurgen Klinsmann's misplaced badges, and Taça de Liga scenes
We’re back with some more continental conversation as Luke Moore, Andy Brassell and Lars Sivertsen bring you another episode of On The Continent on Football Ramble Daily! After a fantastic Coupe de France performance we begin with a discussion on Lyon’s latest academy product, 16 year-old Rayan Cherki. We discuss his impressive technical qualities and also look at the wider history of exciting graduates from their academy’s illustrious history. After that, we check in with a struggling Hertha Berlin and their coach Jurgen Klinsmann, who recently couldn’t produce his coaching badges to Bundesliga officials after leaving them in a cupboard back in the USA - an apt metaphor for their season… Elsewhere we discuss some typically insane scenes in Portugal’s Taça de Liga, delve into the backstory of Braga manager Rúben Amorim and preview the Rome derby in our Games of the Week! Find us on social media by searching 'Football Ramble Daily'. ***Please take the time to rate and review us on Apple Podcasts or wherever you get your pods. It means a great deal to the show and will make it easier for other potential listeners to find us. Thanks!*** For information regarding your data privacy, visit
Show more

About The Football Ramble

The Footbacll Ramble is one of the most influential and entertaining shows about the world's most popular sport, the largest independent football brand in the UK and a must-listen for any discerning fan that enjoys the more entertaining side of the game. Station website