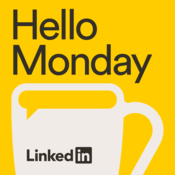 of
Elizabeth Gilbert on Careers vs Jobs
This week, Hello Monday hops in the way-back machine to revisit one of our very first episodes. Best-selling author Elizabeth Gilbert (EAT PRAY LOVE, BIG MAGIC, CITY OF GIRLS) shares her perspective on the nature of work and challenges Jessi on the idea that people should have careers.
Judd Apatow on Trusting Your Gut
Judd Apatow has known since childhood that he wanted his career to be in comedy. How he worked to become a force in the industry – and what that journey taught him – forms the core of this in-depth interview, which became the pilot episode of LinkedIn Editor in Chief Daniel Roth’s podcast, “This is Working.” Judd has solid advice about the importance of good mentoring, how (and how not) to make yourself indispensable to the room you’re in, and why sometimes you’re better off ignoring feedback and trusting your work.
Wonder Woman’s director on asking for more so you can, too.
After Wonder Woman made more than $800 million dollars at the box office, director Patty Jenkins fought hard to be paid equitably to direct the sequel. When she prevailed, she became the highest-earning female director in Hollywood. In this episode, featuring an interview with “This is Working” host and LinkedIn Editor in Chief Daniel Roth, Patty shares her career path, her artistic vision, and her personal mission – to ask for more, in order to help women who will be negotiating after her.
Making It in 2020 with Planet Money's Adam Davidson
The economy is shifting dramatically. Technology, automation, and rising inequality are restructuring companies and reconstituting our notion of jobs. Over several decades of covering the impact of these forces, financial journalist Adam Davidson has met some people who seem to have figured out how to harness these forces to power successful careers. These are people who've turned their own skills into careers that allow them to cover their bills and live well. People who are making it. In this episode, we unpack what he's learned about how to do this.
Thinking Like an Underdog with Troy Carter
This week, Troy Carter proves that being the underdog is a career superpower. Troy has always bet on underdogs, in his music career where he managed Lady Gaga and in his investing career, where he bet early on companies like Uber and Warby Parker. He recognized these traits because he's an underdog himself. He'll share the story of how he made it from West Philly to Los Angeles, and what it taught him about how to take risks.
Show more