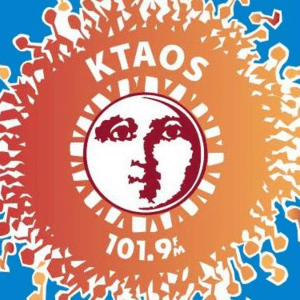 Thirty-five years ago, a small radio station began along a dirt road in Taos. Since then, the station has grown into the world’s most powerful solar radio station and the most popular FM radio station in Taos County. The origins of FM radio in Taos extend back to Chicago when the owners of successful station WXRT decided to bring their formula to Taos. In 1975, Taos Communication Corporation (TCC) was formed, and a year later KXRT was on the air. In 1979, Brad Hockmeyer moved to Taos to work at the station, but by 1982, it was clear “the big city” approach would not work in the unique mountain art colony. Brad took control of the company in 1986 and changed the call letters to KTAO. Five years later, KTAO received international attention when it became the first radio station in the world to be powered by the sun. A super-structure holding 150 solar panels (more have since been added) was installed on the top of the 10,800 ft. Picuris Peak and racks of batteries along with the transmission equipment were housed in an “earthship” made of recycled materials that maintains a safe, constant temperature range year round. In 1996, KTAO grew again, adding staff and doubling the size of its building on Blueberry Hill Road. In 1997, Brad started the KTAOS Solar Music Festival, which attracted an audience of thousands. The three day show was renamed the Taos Solar Music Festival in 1999 and over the next ten years Solar Fest became an internationally recognized event that continues to grow in popularity. What’s Solar Radio? In 1991, KTAO installed a structure holding 150 solar panels on the top of the 10,800 ft. Picuris Peak. Racks of batteries along with the transmission equipment were housed in a self-sustaining Earthship – a partially underground building constructed of tires, rammed earth and other recycled materials – that maintains a constant and safe temperature range year round. Over the past 20 years, the number of solar panels has grown and KTAO is now licensed at 100,000 watts, earning it the title of the world’s most powerful solar powered radio station. 50,000 watts is considered big in solar radio, making KTAO huge in comparison. The photovoltaic panels are virtually maintenance free and cut the electric bill to almost nothing, while allowing KTAO the capability to transmit over a 100-mile radius from Taos. KTAO has not only made a commitment to bringing a great variety of music to the Taos community, but on a larger scale, it is committed to making a lasting difference on the planet with its use and advocacy of solar power.

Listen to KTAOS Solar Radio, Radio Mitology and Many Other Stations from Around the World with the radio.net App