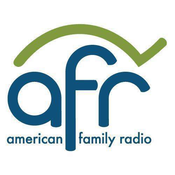 American Family Radio (AFR) placed its first station on the air in 1991 and is a division of the American Family Association(AFA). AFR is a Christian radio network dedicated to strengthening the family and desires to communicate an outspoken, resolute, Christian voice in America through news, information, Bible teaching and inspirational music. Both AFR and AFA are non-profit (501(c)(3)) organizations. The AFA was founded in 1977 by Rev. Don Wildmon. The AFA represents and stands for traditional family values, focusing primarily on the influence of television and other media on our society. AFA believes that the entertainment industry, through its various products, has played a major role in the decline of those values on which our country was founded and which keep a society and its families strong and healthy. The AFA believes in holding accountable the companies which sponsor programs attacking traditional family values. The AFA also believes in commending those companies which act responsibly regarding programs they support. Station website