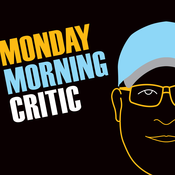 The Monday Morning Critic Podcast is a labor of love for all things Cinema, Television and specific hand selected guests who've moved me in their life's work.

of
"The Trials of Gabriel Fernandez" Interviews with: Deputy DA Jonathan Hatami, Director Brian Knappenberger and Journalist Garrett Therolf.
"The Trials of Gabriel Fernandez" is Directed by award-winning documentarian Brian Knappenberger, the six-part documentary bares the horrific life and death of little Gabriel after repeated abuse by his mother Pearl Fernandez and her boyfriend Isauro Aguirre. The Los Angeles boy was found naked, with a cracked skull and severe burns at his family’s home in Palmdale on May 22, 2013. He died two days later. Meet the man who got justice for Gabriel (Jonathan Hatami) and the men who brought the story to our attention (Brian Knappenberger and Garrett Therolf).
(Episode 174) "The Peanut Butter Falcon" Cinematographer: Nigel Bluck.
Nigel Bluck is a New Zealand born Cinematographer whose work includes all three "Lord of the Rings" movies, "True Detective" and most recently "The Peanut Butter Falcon" Meet the very talented, dedicated and kind, Nigel Bluck.
Exclusive: "The Green Mile" Actor: Doug Hutchison talks about his new memoir.
Exclusive: "The Green Mile" Actor: Doug Hutchison talks his new memoir.
Academy Awards Edition! And My Top 5 Movies of 2019!
Some brief "Pregame" thoughts on the Academy Awards and My Top 5 Movies of 2019.
(Episode 173) "New York Yankees" Hitting Coach: Rachel Balkovec.
Rachel Balkovec was hired in November  as a minor league hitting coach, believed to the first woman hitting coach employed by a big league team. "She was really impressive. I really look forward to having more conversations with her," Yankees manager Aaron Boone said Tuesday after talking with Balkovec at the winter meetings. "She has a really good understanding, especially when it comes to the pitch tracking." A 32-year-old from Omaha, Nebraska, Balkovec was a minor league strength and conditioning coordinator and coach for the St. Louis Cardinals from 2011-15, then switched to the Houston Astros as Latin American strength and conditioning coordinator. She worked with the Dutch national baseball and softball teams in the past year while studying for her second master's degree. Meet Trailblazer: Rachel Balkovec.
Show more