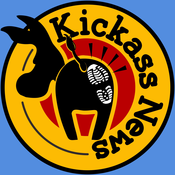 KickAss News is a podcast that features the most interesting personalities.

of
Adam Davidson on the Passion Economy
.
Whitmer Thomas Honors His Mom Through Comedy
Comedian .
Scoot McNairy on Narcos: Mexico
Actor Scoot McNairy talks about starring in season 2 of .
Doris Kearns Goodwin Reveals the Real George Washington
Historian .
Philip Rucker on Trump's Testing of America
The Washington Post's DC bureau chief Philip Rucker discusses his new book A Very Stable Genius: Donald J. Trump's Testing of America .  He shares stories from White House insiders about the time President Trump tried to overturn the Foreign Corrupt Practices act so American businesses could bribe foreign governments, the time Trump wanted to turn a profit on the US military by turning our troops into a mercenary force, and the Pentagon meeting when Trump called his decorated generals a bunch of "babies and losers."  Phil discusses the falling out between the President and his former Secretary of State Rex Tillerson, how some world leaders have tried to turn Trump against his own advisors, and how the most powerful leader in the world solicited other heads of state for the Nobel Prize.  Plus we talk about Impeachment, Trump tweets, Bolton, Mueller, and more. Order A Very Stable Genius: Donald J. Trump's Testing of America on Amazon, Audible or wherever books are sold.  You can read more by Philip Rucker in The Washington Post and follow him on twitter at @philliprucker.  Today's episode was sponsored by deodorant and toothpaste.
Show more