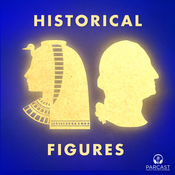 of
Introducing SUPERNATURAL WITH ASHLEY FLOWERS, A Parcast Original Series!
Join Parcast and Crime Junkie’s Ashley Flowers as they dive deep into the strange and surreal to explain some of the world’s most bizarre true crime occurrences in the new series, Supernatural with Ashley Flowers. Every Wednesday, Ashley digs into a different mystifying crime—where the most fitting theory isn’t always the most conventional. Was there a special committee formed under President Truman to recover and investigate alien spacecraft? Sort through the details with Ashley and decide for yourself in this exclusive clip from our episode on the “Majestic 12.” To finish this episode, subscribe to Supernatural with Ashley Flowers free on Spotify, or wherever you listen to podcasts!
Famous Fates: Leon Trotsky
In the first half of the 20th-century, Leon Trotsky was a revolutionary writer, a communist leader, and a man assassinated on the orders of Joseph Stalin.
Famous Fates: Socrates
He was a Greek philosopher who lived in the 400s, B.C.E. Socrates believed in provoking people into bettering themselves and society, but it was this very attitude that led to his execution.
Famous Fates: Andy Warhol
He inspired the phrase “15 minutes of fame,” and proved to the world that anything could be the subject of great art—anything at all. In his later years, Andy Warhol survived an assassination attempt, only to die due to medical negligence.
Famous Fates: Ernest Hemingway
For his book, “The Old Man and the Sea,” Ernest Hemingway was awarded the 1954 Nobel Prize in Literature. But despite his success, he was haunted by a deep sadness—and no amount of travel, women, or alcohol could ever help him escape.
Show more